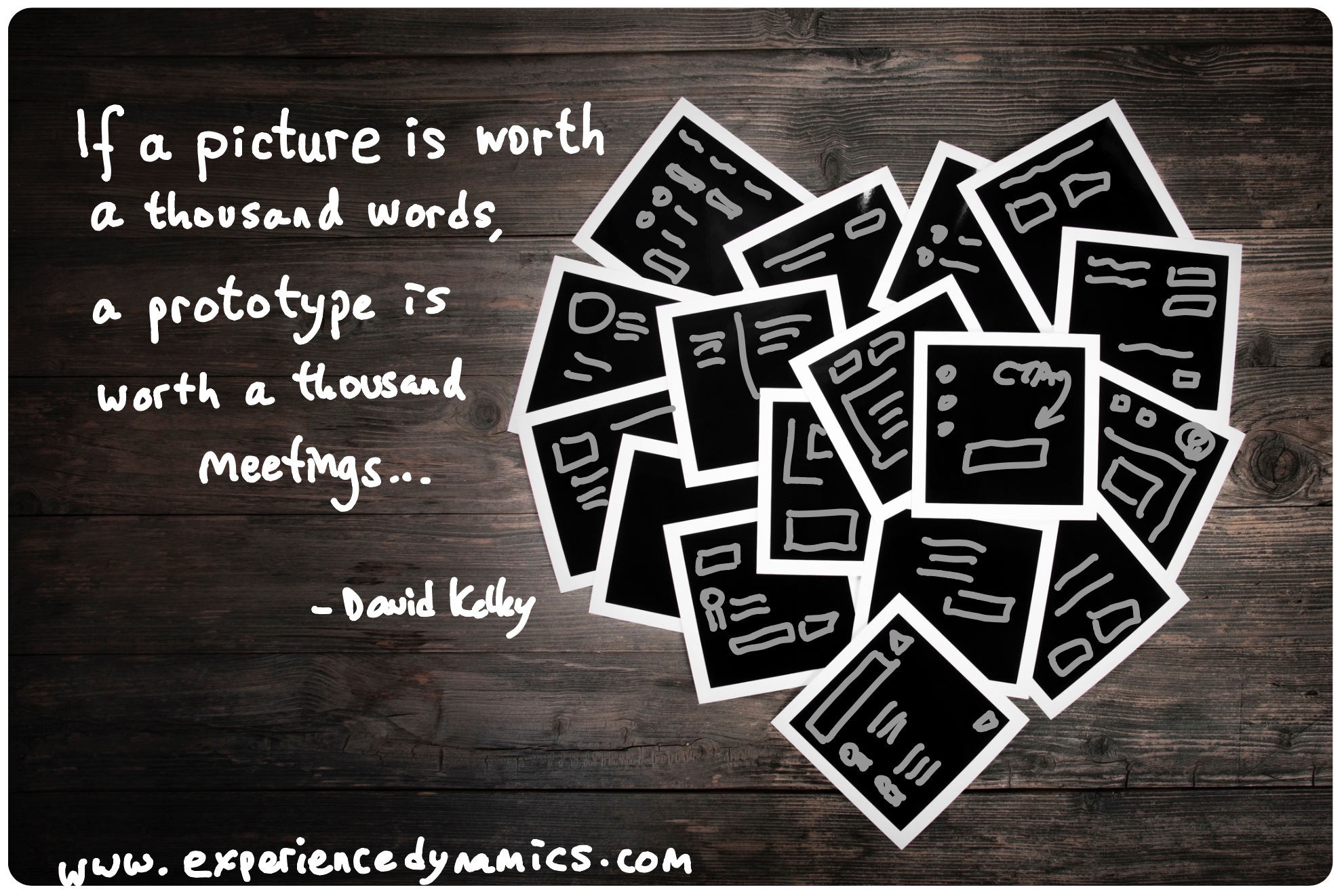 Summary: Prototyping is a valuable sketching process involved in generating UX/UI. It saves you time, saves you confusion and helps you visualize quickly and cheaply. Here are 50 reasons why prototyping is critical to do. These benefits point to the need to develop a company culture of prototyping.

1. Prototyping saves you meeting time: Without visual sketching, UI's are discussed ad-nauseum without a "shared picture", you end up talking about a UI instead of ideating a new solution.

2. Sketching is easier to socialize. Quick sketches, no matter how crude, are great ways to quickly commuinicate.

4. Ideas are easier to scrap, change or re-consider with "low effort" prototypes.

6. Prototypes help you test your design ideas with users.

7. Prototypes give a sense of realism to what's really just an idea.

8. Prototypes can help a developer understand how it's supposed to work.

9.  Prototypes can help an end-user understand how it might work.

10. Prototypes let you see if edge-cases are obnoxious or not.

"In an experiment conducted at UCLA some development teams used conventional development methodologies while others employed prototypes in the software development process (with no particular emphasis on the interface). …Code of the final systems produced by prototyping groups was only about 40 percent as large as that of their counterparts, possibly at a cost in generality of design. Finally, the prototyping groups accomplished their task with 45 percent less effort than the other groups." (Source: Hartson and Smith)

14. Prototypes reveal bugs and issues in your Information Architecture.

15. Prototypes reduce requests for clarification by developers by up to 80% (Source: Warfel).

16. Prototypes can show you how your design might look on mobile (responsive design planning is easier).

18. Prototyping gives you a chance to explore risks and explore opportunities.

21. Prototyping acts like a UX/UI checklist to make sure you have thought things through.

22. Prototypes give insight into what may have been a good idea in a discussion, but is actually clunky.

23. Prototypes show where details are missing.

24. Prototyping can make documentation more meaningful, or can reduce or remove the need for detailed documentation.

25. Prototyping helps you tell the story (of the user journey).

26. Prototyping can help developer estimates for build time and cost, to be 50% more accurate (Source: Warfel).

27. Prototyping helps you sell the UI big ideas (to stakeholders).

29. Prototyping gives product managers a better grasp for what is being proposed.

33. Prototypes can give you a quick "litmus test" of an idea.

34. Prototypes can give a UX effort credibility, rapidly.

35. Prototyping can reveal where users needs have been overlooked.

36. Prototyping can let you test many different options and flavors of a UI.

37. Prototypes can let you "spoof" complex interactions, to test their validity.

39. Prototyping lets you back out of expensive mistakes and errors, with little impact.

40. Prototypes can get a team excited about progress with a new design, redesign or usability enhancement effort.

41. Prototypes can force a difficult conversation about complexity in the UI, business or technology rules.

43. Prototyping can help involve and unify ideas and input across a company.

44. Prototypes can help examine the underlying interaction design without the bias of visual design.

45. Prototypes can speed up visual design by giving designers direction and structure.

46. Prototypes can spark a debate or validate a feature idea.

49. Prototypes let you inspect a design, as if it was real.

50. Prototyping can turn around design decision-making in teams.

Toward Prototyping as a Company Culture

Prototyping offers many benefits! It's no wonder, of the UX Design tools, it's popular among teams. We encourage your comapny to start protoyping as a visual communication aid. We recently provided UX/UI Training to a large client who insisted that everyone (tens of thousands of employees) have access to prototyping software, and use it to communicate UX Design ideas. This gave them a light, fast, cheap and effective process to aid design decisions. Smart move.