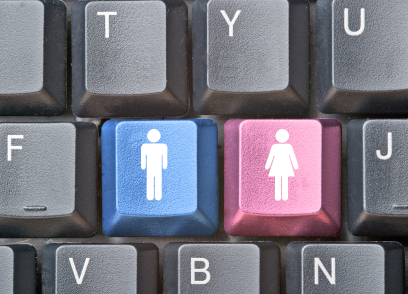 The worldwide study adds some key insights into the growing research on gender differences on the Web and in particular around social networking usage. Why is this a big deal?

Differences in gender are important to understand so we can increase our ability to provide more targeted,  relevant and desirable user experiences. It's a design issue as much as an advertising and strategy issue. I feel the User Experience community, has not fully tapped the potential of gender-specific design aka Woman-centered Design.

Gender as an audience sensitive criteria (differentiation) is barely present in North American technology product design (where it is much easier to do) let alone Web experiences. In Asia there is more design innovation in this area, for example, see: Toshiba's Femininity series. Implications of this phenomenon are discussed below. First a summary of the findings:

1. Women have surpassed men as online buyers (and they spend more) and their influencing is growing rapidly, in addition to the use of group buying or 'flash sale' sites (eg. Groupon.com LivingSocial.com). Social retail is an emerging area for women, due to their tendency to share and discuss with other others.

4. Social networking is emerging as a driver for women in the mobile sphere.

5. Women are using online entertainment (e.g. puzzle, board and card games) and functional sites (money management) as much as men (change in past behavior where health, apparel, baby goods).

8. Women are still attracted to health content, community and lifestyle sites. However women are outpacing men in some areas of finance and are actively engaging in male-dominated areas: adult content and gambling.

9. Compared to men, women Bing users spend more time on Bing for search, than Google- and YouTube for video.  Facebook, while visited more than men is unable to compete with regional social networking sites (such as CyWorld in South Korea, Vkontakte.ru in Russia, Mixi.jp in  Japan or StudiVZ in Germany), especially among older women.

11. The embrace of social networking and its importance to women has significant implications for content and user experience.

12. Women spend more time on photo sites and adopt photo sharing faster. Email usage is higher in the 45+ age group. Latin American women do more IM'ing than other women globally, with their use of email topping North American females.

Significance of the Data

The findings from the Comscore global study provide a fresh starting point to understand the opportunities for designing user experiences, both Web and product, that resonate with women. Women's presence on the Web is changing, and as Comscore found- access to technology (computers and Internet access) is a major hindrance to more women getting online. As more of the world's women get online, the design opportunity for designing for women will be the default (not the exception- as it has been viewed in the past).

A 2002 study by Van Slyke et al. titled Gender Differences in perceptions of Web-based shopping found that women were visiting shopping sites more than men, but that men were buying over women. The study also recommended: "Web merchants may find it useful to use technology to increase a sense of community and create a social forum for their customers". Given the Comscore findings above, women's usage of the Web has clearly changed! But has web design and user experience strategy kept up?

A 2007 study by Horvath et.al. title Gender and web design software (PDF) found that web site design has an over-arching tendency to be masculine or male-oriented (in terms of layout, colors, font) than to be female-friendly.  In 5 of 11 design items  (Cyr and Bonanni, 2005) found differences in perception, opinion and satisfaction between men and women. They concluded:

"Women were significantly less satisfied than men with the navigation of the site. This suggests a need to better understand the needs of women in order to navigate and find product or service information on websites"... and that "clear differences regarding perceptions on design occur between men and women".

The authors note that very few studies of gender and web design exist and there is a need for more exploration. Previous studies have given some indication of gender differences showing that women prefer ease of use and navigation 'features' over download speed (men like fast sites). Moss and Gunn (2005; 2006; 2008; 2009) at the University of Glamorgan (Wales) have conducted the most extensive studies in the past five years in the area of gender and web design and have found significant differences in how men and women differ in web design. Read an interview and slideshow summarizing their work.

We don't know empirically, but from the studies that have been done to date as well as the new Comscore data, we're getting some very strong clues. In several studies, Stilma (2006; 2009) found that differentiation in design with a bias for women was extremely effective as a product design approach and that more designers should focus on designing for women.

I wonder what opportunities a gender-specific design approach could offer, especially when I see Bluetooth headsets worn by women that look anything less than fashionable or styled for women. And every time I tried to buy a pink camera for my wife a few years ago, it was sold-out of all the local shops and online stores! Something has to be going on here...

I know that gender as a design variable in my corporate projects over a dozen years at Experience Dynamics is something clients don't deliberately assess or design for. Yet in a very recent usability test, I was reminded of the opportunity when one of two women in a ten person usability test said she wanted an extra pink tab at the top for women's content or features (in a male-dominated content website).

As social becomes the new infrastructure for all our software and web experiences into the next decade, it will be characterized, if the trend captured by Comscore continues, by global adoption and innovation by women. Will these female driven usage scenarios in social networking open the potential for more gender-specific design approaches and opportunities? Industry is slow to get the message, but change is coming as witness, for example, by the personal expression laptop manufacturers are allowing in their offerings of colorful, stylized and differentiated products-- something that was difficult to find in the mainstream five or ten years ago.