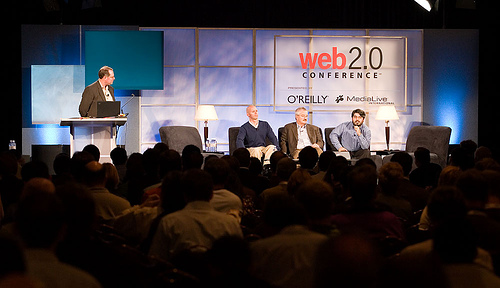 A new approach to web and web application development that is
characterized by:

Web 2.0 seems to have taken flight in the last 10 months related to:

A word about hype

Is Web 2.0 just hype? Many large organization including Yahoo!, Google and Microsoft are investing heavily in the technologies and projects that are driving Web 2.0. If you loathe hype (as I do), perhaps you should see it for what it is: Hype seems to be an expression of the excitement generated by something new; it is often careless, clumsy and poorly thought out- but it's real purpose is to excite and ignite the feeling of change, progress and newness.

Having said that, I think this interesting article by Russell Shaw at ZDnet, is refreshing in terms of putting the Web 2.0 "hype" into context:

"Web 2.0 is bunk. Not that the elements of this rebirth aren't there. I
write about some of them, and Richard has them nailed. It's just that
they cannot be classified under a common umbrella. They are forward
lurches of various standards and technologies, some compatible, some
not. Some revolutionary, some evolutionary, some impractical. Some are
collaborative, others are highly competitive with each other".

What's New with Web 2.0 as a technology shift?

What's different about this technology curve is that this time, user experience is on the agenda, despite the fact that Amazon's Jeff Bezos sees Web 2.0 as "about making the Internet useful for computers". (Amazon's focus is on creating viral API's with Amazon Web Services). To give Bezos credit, he also has said,though not in his Web 2.0 related interviews,...

If there's one reason we have done better than most of our
peers in the Internet space over the last six years, it is because we
have focused like a laser on customer experience, and that really does
matter, I think, in any business.

Even conversations are occurring with regard to using the social web to make advertising more relevant.

How Users and User Experience Will Benefit from Web 2.0

2. Better Web User Interfaces Will Improve Subjective Satisfaction. Potentially being able to do more natural interaction (such as drag and drop or zoom) will give users a more intuitive way to interact with data. A focus on sharing will make the web seem more close to home or to a social circle (existing or created). Tagging will potentially create a user-centered "information architecture" that relies on context, semantics and personal labeling systems or so-called "folksonomies" rather than hierarchies or taxonomies.

3. More Trust and Credibility from Institutional Sources. Allowing self-publish or two-way publishing will give users more control, power and choice of data and opinions, views and decision-making resources. Blogs and ways to better integrate or share text, video and audio blogging will change what it means to be informed about a purchase decision or a visit to a destination.

Bottom Line: Web 2.0 seems to be reflecting the changes in the world and the way the current generation of web innovators interpret and re-purpose existing and newly used technologies. Web 2.0 or whatever you call it, is already here. For example Public Relations and Marketing savvy people use del.icio.us to monitor buzz; Technorati to track blog feeds and Epinions to monitor customer criticism, wants and needs. Pay attention to what is happening in Web 2.0, because it represents change at a micro and a macro level and whether you notice or not, change will affect your site whether you like it or not.

Are you ready for Web 2.0? (BayCHI panel -Audio program)