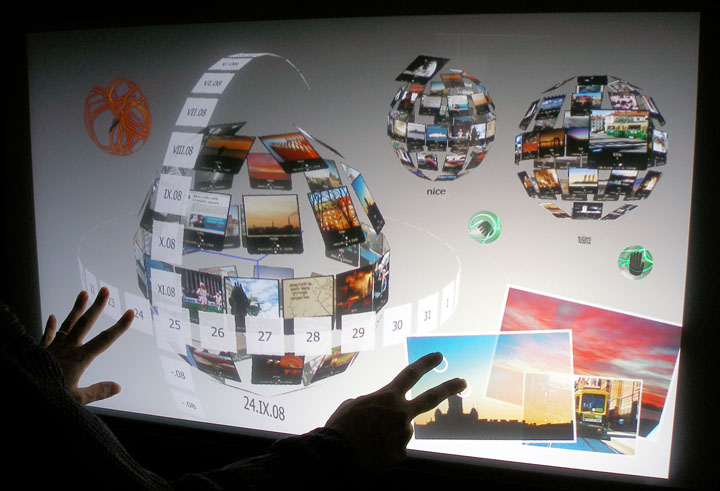 The annual Consumer Electronics Show (CES) 2012 just wrapped up in Las Vegas and while word has it there were not many surprises, user experience (UX) and new user interfaces (UI's) were an underlying theme.

It's good to see UX on the brain: It shows it is becoming widely understood that the key to user adoption with new technology demands a calculated obsession with your user experience. So what trends and themes can you take away from this year's CES on the user interface front?

Strong clues from CES this year, captured by the visual from CityWall (image above left) is that 3D, touch-able and visual retrieval of content are strong trends that will be with us this year and beyond. The biggest buzz at CES 2012 comes from a promise to replace TV remote controls and laptop mouse and touchscreen interaction with new "natural" interfaces: speech, gaze and motion sensitivity. Yes, wave to turn down the TV (Samsung smartTV); duck to avoid super-realistic 3D in a portable TV (Sharp); or gaze to select a button (Tobii laptop) and finally tap your credit card to the palm rest to pay for your purchase (Intel demo).

CES research director Shawn DuBravac, dubbed 2012 the "year of the interface." Technology is finally enabling the flow of information, but how on earth will users manage their content?

“We spent the last decade playing out the digital transition, which was a broad shift from analog technologies such as VCRs to PVRs, or analogue TV to digital TV. The second phase will see the market start to leverage all these digital devices. The average household today has about 25 consumer electronics (CE) products—the next step is taking advantage of those devices with interconnectivity. This means starting to capture the vast volume of digital assets we have created, whether that is professional video or music content or self-generated, and to begin to organize them so we can search and discover them.”

1) Morphing (convergence) of computing functionality to non-traditional devices: eg. SmartTV's; or SmartPhones adopting a computer's functions. Sharp revealed a TV that can be written upon like a whiteboard.

“In the last few years we have seen apps like email, Twitter and Facebook on CE devices like TVs,” he said. “Manufacturers wanted to show these properties because it said to consumers that the product is connected. But the experience is generally poor. The next focus will be on improving the user experience."

The biggest surprise at CES according to Gizmodo was the usability clean-up of the Research in Motion Playbook tablet.

3) Attempts (my emphasis) to add gesture, voice and personalization to improve UI's. I am not as optimistic about the usability of these UI elements, as they are historically difficult to master, with the exception of gesture- if done right (iPad and Kinect as two shining examples). You only need to look recently at Kindle Fire usability (lackluster touch) and Apple's Siri usability (lackluster voice) or even worse Microsoft's TellMe for examples of how tricky it can be to pull off good user experience.

Personalization is another area that makes for good sense in UI innovation, but has a poor track record in terms of technology and user experience.

In the mobile area, 3D mobile interfaces are heating up:

Despite the hype and R&D demos (many of which take 5-10 years to reach the market if they ever do), the factor that will clearly determine success of the new user interface approaches will be the user experience. Technology aside, we can be certain of that. SF Gate's reporter James Temple nailed it when he said:

"These are still early days in natural user interfaces for consumer products, and we're going to see a lot of experimentation - and plenty of applications that are more gimmicky than useful. User interfaces aren't natural if they're overly complex or clunky.

The goal here is that users shouldn't have to learn a new language - as they did with the mouse and graphical user interface - to communicate with devices. If the gestures a gadget understands are not intuitive, or the voice commands too literal and specific, this will all miss the point".