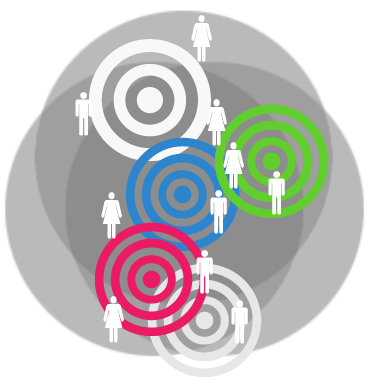 The recent release of Google's social circles (part of the new 'Google +' social network) is particularly exciting since I think it constitutes a social interface that accounts for real-world considerations.

This in contrast to the user experience approach of the largest social network in the world, and a top 10 hated company in America: Facebook. See my previous post for back story on Facebook user experience.

I am particularly excited to see how Social Circles plays out, since it's a social interface design approach I personally worked on three years ago for an Experience Dynamics client. It's also exactly the approach included in the redesign of Facebook exercise, featured at the end of the Designing the Privacy User Experience seminar.

What are Social Circles?

In short, social circles give you control over how you categorize your contacts and what you broadcast to them. It's a sharing system that accounts for real-world social behavior which naturally categorizes, includes and excludes for example: your church friends from your work friends from your family and drinking buddies (as one developer put it to me several years ago).

Social circles fulfill a critical need in social networking: the need for users to exert influence and control over social fabric (distance or closeness of people to information, values and personal behaviors).

Here's a hilarious explanation from Ben Stiller in Meet the Parents of the need for controlling ones social circle, or "circle of trust".

Who's thinking about Social Circles?

More people than you might think. When I first started thinking seriously about social circles, around 2008, I ran into Steven Blyth's brilliant thesis project, The Social Fabric. The idea originally aimed at a PDA, but with implications on any device or app, was that an avatar would indicate to you non-verbally how well you had been nurturing your contacts/ communications/ friendships. A colleague you had not contacted or were somehow ignoring would be illustrated with an avatar's posture, e.g. his back turned to you. Here's an archive of the Social Fabric idea and a video reel of usage scenarios.

Several years ago Chris Collison mused about social circles and captured the essence of the need for such a mechanism succinctly:

Some overlap will happen in social networks but maintaining boundaries helps you keep professional contacts eyes off of your private matters, your personal goings on, your family status, your childrens’ accomplishments, etc.

Marcos Weskamp created social circles as a way to manage the fragmentation of persons in a mailing list environment:

At a glance it allows an easy way of grasping the whole situation by highlighting who is participating, who is "visually" central to that group, and displaying the topics everyone is talking about.

Paul Adams more recently fleshed out the idea of social circles nicely in a powerpoint presentation and a new book called Social Circles. The book with the same name as Google's new feature, is mysteriously "currently unavailable" on Amazon or anywhere else.

Social circles are an approach to privacy user experience that takes us a step closer to the main point of social networking: To let the user have control of her social fabric in order to leverage the most from social and data effects. Ultimately the design of social interfaces should help users to communicate more effectively, be less misunderstood and increase tolerance while protecting the user's privacy and personal situation- whatever that may be (defined by them, not the system).

If you are involved in designing a compelling customer experience with social media, social networking site or app or social software, you should pay close attention to the approach of the social circle. One of the proven benefits of conducting field studies is to extract real-world social phenomenon and accommodate for it in your interface and user experience strategy.

Google's Social Circles if anything opens up the conversation toward what might be a better social networking user experience. It's also a potential signal from a major player with a lackluster track record in privacy, that privacy does matter to user adoption, as a CNET analyst noted. That's a welcome sign of intelligent life in the social networking universe to be sure!