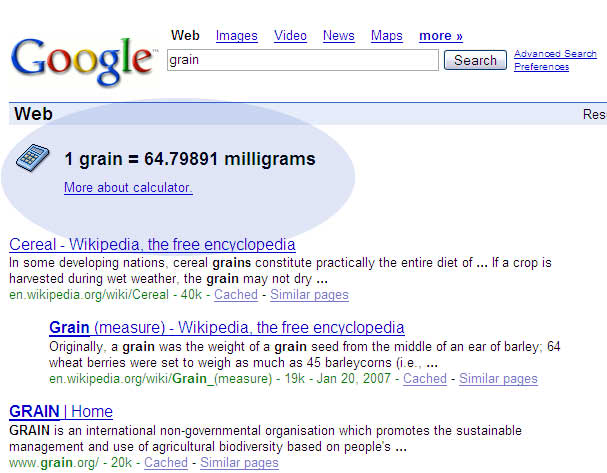 Quick Google user, you need to look up a measurement; phone numer; UPS tracking code; address; mathematical formula ..."Didn't you know Google had a tool for that?"

Yes, Google has a tool for everything these days it seems, but it's not a consistent tool kit. Sometimes you get it and oftentimes you don't.

Is that why Google doesn't promote what I call their "world of widgets"
(WoW's)? How is it some people know the secret handshake and many more
don't?

This article focuses on why that is and speculates on whether Google may have taken a popular interaction design technique known to the usability community as "progressive disclosure" to heart, when deciding to roll out all those wonderful "WoW's" to you.

Well we know Google is very careful with their presentation layer (read user interface). Google's army of usability engineers must be under a lot of pressure. You don't win search out of Stanford because of your "I'm Feeling Lucky" button...

Side-note: So how do you win your market category? From my perspective it's no accident that you have a recipe in a few easy steps:  1) Your founders develop some solid technology; 2) Your founders respect and value usability and make sure it's entrenched in core infrastructure; 3) You get a usability leader on your technical board of advisory panel (Jakob Nielsen has been on Google's board for years); 4) You have some market conditions where everyone else thinks the average user configures interfaces. Instead, you decide simplicity is not just an Eastern philosophy, but a technology leadership imperative.

Google has come under a lot of criticism in the past few years for keeping that home page so simple that users don't know 90% of the features and widgets (tools) they offer even exist. Is that stupid or is it part of the plan?

If you look at how Google works, it only serves you up a tool when you "need" it. To your surprise (sometimes), "BAM!" an instant search result with some lightly-branded Google add-on.

Simplicity is sacred at Google

Google knows this is a problem, I think they just don't know what to do about it. How do I know? Look at how Gmail is being promoted on their home page: "Free email with 2.8GB storage and less spam. Try Gmail today." It seems to have become a common fixture with their "official" launch (Feb 07). With Desktop search Google started to add it to the bottom of each search results page, then other major products started to appear as contextual promotions for the new products.

Simplicity has become an imprint of their brand experience. Clutter that search page and you're likely to soil Google's virginity. The equivalent of putting words next to Nike's swoosh- you just don't do it ;-) (the swoosh stays a symbol without words, a testament to it's universality).

Is Google ignoring its early adopter "base"?

IT professionals who helped Google build the "base" in the late 1990's are starting to feel left in the cold by Google's simplicity (in a bad kind of way). Why?  Because Google is like a box of chocolates that you have to explore to find the macadamia nut, because the little "contents map" is missing. User centered design pioneer Don Norman explains:

"Look, I like Google. It's a great search engine. But I am sick and
tired of hearing people praise its clean, elegant look. Hell, all
search engines have that clean elegant part to them: type your search
terms into the box and hit "Enter."

"Oh," people rush to object, "the Google search page is so spare, clean, elegant, not crowded with other stuff."

True, but that's because you can only do one thing from their home
page: search. Anybody can make a simple-looking interface if the system
only does one thing. If you want to do one of the many other things
Google is able to do, oops, first you have to figure out how to find
it, then you have to figure out which of the many offerings to use,
then you have to figure out how to use it. And because all those other
things are not on the home page but, instead, are hidden away in
various mysterious places, extra clicks and operations are required for
even simple tasks — if you can remember how to get to them". from The truth about Google's so-called "simplicity" by Donald Norman, PhD

Reminder of the definition of progressive disclosure:

Progressive disclosure is an interaction design technique that
sequences information and actions across several screens in order to
reduce feelings of overwhelm for the user. By disclosing information
progressively, you reveal only the essentials and help the user manage
the complexity of feature-rich sites or applications.

The problem is, as a business- you don't know what Google has for you. Is this why Google Answers was shut down?? Google Answers was a great service for asking a question, answered by an expert. Just as Google announced it's shut-down, Yahoo! announced a re-launched "Web 2.0" style Yahoo! Answers with community features, intuitive user interfaces and more...

Google hides what it thinks you don't need until you, say, type in 'Vietnamese food portland', then you get enhanced results with Google Maps.

"BAM!"-- progressive disclosure to Google Maps... Any usability engineer would be proud. Except the surprise of it all is sometimes annoying (especially to IT professionals). And worse, the hidden WoW's are not consistent.

Even Google's 2-3 year private beta (wink, wink) release of Gmail (just officially launched last week) is a form of progressive disclosure. "It's here- let's get the tool out to your friends and colleagues, and if you really want it, they can disclose it to you". I would call this more of a clever marketing tactic but it seems to echo my analysis of progressive disclosure as a business model. I also use Google AdWords, Google Analytics and a few others and they do the same thing- for logging in to each- none are connected- each log-in progressively discloses another log-in...it can be really annoying.

Ironically, Jakob Nielsen is on Google's technical advisory board and he is a big proponent of progressive disclosure. Did Google misinterpret Jakob Nielsen?

I don't know, what do you think?